October 13, 2016, 9:36am, Burnaby, BC. A person with a loaded shopping cart wants to cross all six lanes of Kingsway, busy with the morning rush. Incredibly, someone driving in the center lane ahead of me decides to stop and let the person cross. There's just one problem: nobody else can see what's going on. I notice only at the last moment, soon enough to avoid the person crossing if they had been dumb enough to continue.

Watch the top of the video starting at about 0:08, just beyond the long row of stopped cars in the lane to my right.

(Sorry about the weird camera angle. Someone tilted the camera and I failed to notice earlier.)

In the rear view, I watched as the crosser sensibly retreated. Meanwhile, the cop in the car ahead of me either didn't notice, or didn't care, neither of which makes them look good.

Drivers: please don't stop for pedestrians crossing busy streets unless you know for sure all other drivers can see them.
Posted by Jeff at 7:57 AM No comments:

Communities around the world are experimenting with the seemingly crazy idea of getting rid of road markings. Research has shown that doing this actually makes people drive more cautiously and slowly. And guess what? It's working.

The Guardian has more.
Posted by Jeff at 5:43 AM No comments:

How to adjust your mirrors for complete coverage 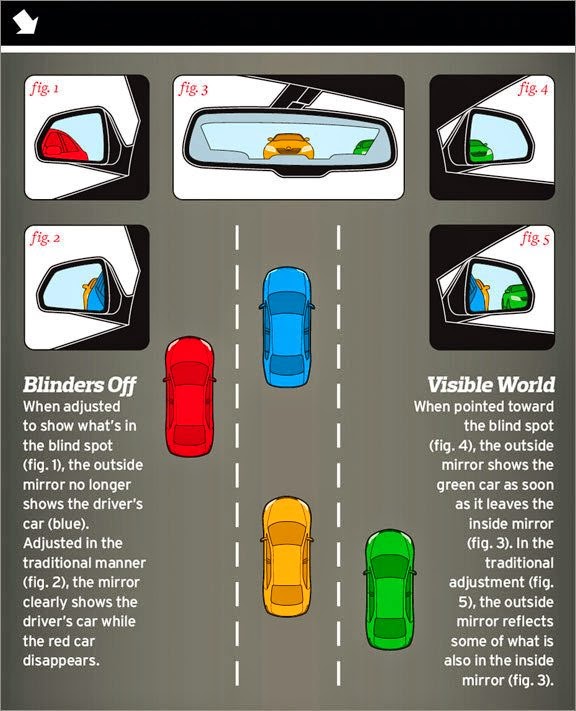 It's only a matter of time

... before the tiny woman driving the enormous white Hummer that drove me off the road yesterday kills someone. I was southbound on Fraser Road in Vancouver, and the Hummer was in the left lane, beside me and slightly ahead. Without any warning (like, you know, a signal or something), the Hummer veered into my lane, surprising me enough that the only thing I could do was stamp on the brakes and steer towards the curb. Seeing no reaction at all from the driver of the Hummer, I followed it for a couple of blocks and pulled up beside it. I could barely see the driver's head through the side window. How can she drive that thing without being able to see anything? How did she get a license? I shudder to imagine what it would look like to see her try to park that thing. Anyway, I gave her a big ironic 'thumbs up' and left her to presumably wonder what I meant. Well, she'll figure it out sooner or later when she maims or kills someone.
Posted by Jeff at 4:52 AM No comments:

It's been a while since I posted here, but for this, I just had to.

So I'm driving on a highway, limit 90 km/h. Traffic is moderately heavy. I'm in the right lane, doing about 10 k over the limit like everyone else. Suddenly, the car ahead of me applies the brakes. Not hard, but he's definitely slowing. I slow down to avoid  rear-ending him, and I see that the cars ahead of him are also slowing. I figure maybe someone has slowed to pull over and everyone will get back up to speed shortly. But I was wrong.

With cars in the left lane now whizzing past, the right lane comes to a complete stop. I poke my head out of the window, and I can just see a car, about ten cars in front of me, stopped and signalling left. I'm starting to worry now, because stopping on a highway is an extraordinarily bad idea, and I know that it's just a matter of time before someone gets rear-ended and we maybe get a chain reaction pile-up.

I hear the cars between me and the idiot at the front of the right lane honking, and some of them start looking for openings in the left lane traffic to get around this idiot. Cars are building up behind me now too, and some of them are trying to get into the left lane as well, but traffic there is steady. Eventually, there are holes, and people in front of and behind me start filling them.

Of course, those holes are what the idiot at the front was waiting for, because what she really wanted was to make a left turn. She stopped because she didn't want to miss her turn. She didn't pull over. She didn't keep driving until she found a safe place to turn around. No. She stopped dead in the middle of a highway.

Eventually she forced herself into the left lane, and from there into a turning lane, and made her left turn. I was screaming in disbelief and disgust at this point, and so were many of the drivers around me. I witnessed a lot of wild gesticulating as well, and a lot of exaggerated head shaking. And so we all moved on. I waved at the idiot, in a non-friendly way, though I doubt she noticed.

Incredibly, we all emerged from this incident unscathed. I believe that nine times out of ten, this kind of thing would lead to one or more collisions, and possibly serious injury. In a way, I was almost sorry nobody collided, because I would have enjoyed enormously providing excellent testimony in the idiot's dangerous driving trial. This person should not be driving, and I worry that she shares the road with my parents. It's only a matter of time before she causes a serious accident.
Posted by Jeff at 1:27 PM No comments:

Not the worst driver ever, but close

Driving  to work this morning, I came to a crosswalk with a red light, so I stopped.  Most crosswalks here use stop lights that point in two directions along the road being crossed (as opposed to regular stop lights that point in four or more directions).  These lights flash green until a pedestrian presses a button, whereupon they go red for a minute or so.  Drivers must obey these signals exactly as if they were regular stop lights.

I didn't see a pedestrian, which means they probably already crossed before I got there.  Anyway, when I stopped, there was a car stopped opposite me, in the oncoming lane.  This car was signaling for a right turn.  The crosswalk in question is - like so many others - at an intersection of a minor cross street.  Access to the main road from the cross street is controlled by stop signs.  There has always been some ambiguity regarding whether it's okay to turn right at a crosswalk that's currently RED if doing so causes your car to pass through the crosswalk, so I just assumed that the driver wasn't sure and was waiting for the light to go back to flashing green before turning.

As I waited for the light to go back to flashing green, in the car opposite me, the driver looked up from whatever they had been doing, and without waiting for the light to go green, drove straight through the crosswalk - while still signaling for a right turn.  The car behind them pulled forward and stopped, and its driver and I exchanged a puzzled look.

For those of you playing at home: how many mistakes were made by the first driver opposite me, and what were they?
Posted by Jeff at 1:30 PM No comments:

A few days ago I witnessed a perfect example of the kind of bad driving behaviour I would most like to eliminate.  A driver entered the left turn lane at a busy intersection and took his place at the head of that lane, waiting for the light to change.  In this case, there is an advanced left turn signal that allows perhaps a dozen cars to make that turn before the next wave of two-way traffic pours into the intersection.

As I watched from one of the lanes opposite this driver, waiting for the same light, the two-way advanced green started flashing, and the driver in question just sat there.  He then turned off his left turn signal.  When the advanced green ended and the regular green lit up, he pulled into the intersection slightly and began trying to merge with the traffic going straight through the intersection.  He was eventually successful.

Let's set aside the danger of attempting to merge into through traffic from the middle of a busy intersection.  That danger is significant, but it's not what I want to talk about here.  Instead, consider the long line of people behind the driver in question, hoping to get through the intersection, turning left on the advanced green.  Normally, those people would have gotten through on one cycle, but because our driver was plugging the lane, they had to wait for at least one more cycle.  That takes a few minutes.  Our driver has just wasted a dozen drivers several minutes out of their day.

And what did our driver gain for this?  If he had simply made the left turn and then turned around at the next opportunity, he would have wasted a few minutes of his own day, but no other drivers would have been affected.  Did our driver consciously decide that his own time is worth more than that of twelve other drivers, combined?  Or is it more likely this just never occurred to him?  Did he simply panic?  Unfortunately, none of these alternatives are very appealing.  The driver was one or all of these things: selfish, oblivious or panic-stricken.
Posted by Jeff at 6:36 AM No comments:

This is my sporadically-updated blog about driving and its perils.